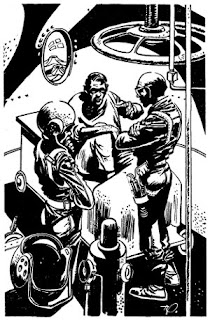 In his Gamma World cover to cover series at Grognardia James Maliszewski  noted: "I can't help but notice both the vagueness and the ad hoc sub-systems created to patch over holes where D&D provided no rules or no model on which to make rules. I don't think this is a bad thing by any means. Indeed, I think I prefer this approach all things considered. However, it's definitely one that is alien to so much of contemporary game design and the culture of play that's grown up around it."

I definitely want to emulate this in Humanspace Empires...particularly the vagueness.  The lack of detail for many of the skills has been one of the major criticisms from playtesters and reviewers. Although I can see that a more thoughtful approach to skills and more clarification is needed, I don't want to lose vagueness and I don't want the importance of skills overstressed in the game.  I've started working on somewhat more detailed descriptions and a few changes in the Scientist skill set.  These will be posted in the near future.

I found one bit in Dungeon Crawl Classics that I liked quite a bit and plan to include in the final Humanspace rules to replace the somewhat artificial and arbitrary limits on the number of times that psychic and super-scientific powers can be used each day.  Excepting a few powers already noted in the Humanspace rules as being so draining that their use limits access to all psychic or superscientific powers for x days, there will be no limit on the number of times that an individual may attempt to use powers; however using any power will incur a  cumulative -1 penalty per use on subsequent power success rolls until the character is fully rested, typically after a period of at least 8 hours sleep.  I will begin using these rules in the PbP games immediately and see how it works.
Print Friendly
Posted by The Drune at 8:08 PM