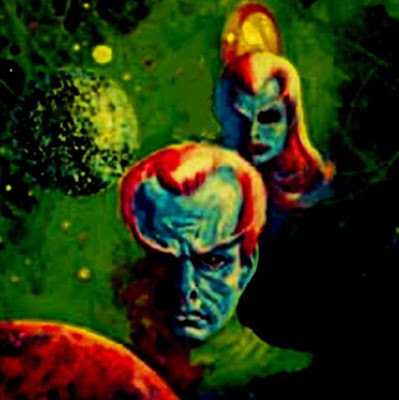 The Rahmú are a fierce and militaristic race of blue-skinned human mutants; descendents of a lost First Empire colony coreward of Aldeberan.  Their language is an ancient dialect of Sunuz.
Although the original colony world is now unknown, they maintained an advanced, though fragmented and unstable,  civilization and controlled a small interstellar empire before being conquered and reassimilated into Humanspace in the early years of the Third Terran Empire.
The Rahmú are known as great warriors,  traders, mentaliks and artists and even by the standards of the Humanspace Empire, they are considered cruel and devious. Their sadistic sense of humor is legendary. They are hot tempered, nihilistic and place little value on life.  Rahmú traditions include the  zchivú- eh-zchiv, a complex code of honor that demands a duel to the death for even slight offenses.  On Rahmú controlled worlds, justice is harsh and punishments are often ironically linked to the crime.  Torture is considered a form of art.
Males and females are considered equals in  Rahmú society and they are, sexually, very libertine and engage in group marriages.  Sybaratic sects are popular and these are rumored to be amongst the most extreme in known space.   Sunuzlāmic mysticism and Astronaut cults are also quite common.
They love  display and decoration and their devices are typically ornate and covered in complex geometric designs and grinning demonic faces. The effect is so disorienting than anyone unfamiliar with Rahmú technology suffers a -2 penalty when attempting to use their equipment. Rahmú art and architecture appears to have been influenced by the psionic alien Vrilú.  A population of degenerate Rahmú were found on Aldebaran 4, a Vrilú world.
The Rahmú Empire engaged in eugenics programs and genetic manipulation that, although crude in comparison to that of the Clone Masters of the Second Terran Empire, have resulted in the sub-species being somewhat stronger, hardier and more psychic than average humans; Rahmú characters must have STR, CON and PSY scores of at least 10.  They tend to be extremely self absorbed and abrasive; Rahmú characters will have a CHA no greater than 15.  They are not limited in choice of class or in advancement within any class.
Print Friendly
Posted by The Drune at 11:20 PM