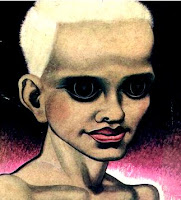 The Veritable Autocrator and Emperor of Humanspace was born Muád ZaMún on Aldebaran 4 circa 61127 AD. Although his parentage is undocumented, the Galactic Emperor named his father as the deceased Nar-General Viz ZaMún, Planetary Governor of Aldebaran. Little is known of the Autocrator’s childhood on Aldebaran 4. It is believed that after the mysterious destruction of the Imperial Mission and garrison, the orphaned future Autocrator was taken in and nurtured by the subterranean and eyeless alien Vrilú.
Although various rumors and reports have incriminated the Mihálli, Regulus, and several local alien factions in the disaster, it may be most likely that the enigmatic and psychically powerful Vrilú were directly responsible for the death of the Autocrator’s family and the massacre of the Humanspace settlement on that world. The Vrilú had, for millennia, spurned all contact with interstellar society and protested any incursions on their vast, lush and primordial world. Regardless of their culpability, their reasons for adopting the young ZaMún remain unknown.
By the year 61145 AD, the young Autocrator had returned to Humanspace and was enrolled briefly at the Science Academy at Procyon. Drawn to the stars, the Autocrator stayed on no world for long. Backed by a powerful Nininyal trade collective, he explored Deep Space in the regions of far Deneb, returned with an extravagant fortune and placed himself at the head of Ket ZaMún, the House of ZaMún amongst the Imperial Archonates. In these acts, it became clear to his associates and enemies that the future Autocrator was a mentalic of extraordinary, perhaps unprecedented power. Within five years of his installation as a Lord of Humanspace, he deposed the Emperor Zurák and ascended to the Duranium Throne. In the first years of his reign the Autocrator launched a massive attack on Aldeberan 4 resulting in the extinction of the Vrilú.
The Veritable Autocrator, Emperor of Humanspace, rules from a grand palace on the terraformed and near deserted sixth moon of Jupiter in the company only of his many concubines and elite Sultyat Clone guard.
Print Friendly
Posted by The Drune at 8:42 PM