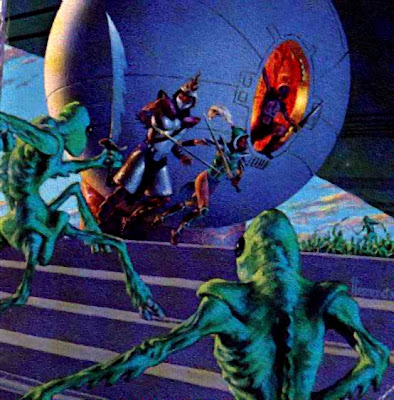 The above image, a detail from the Richard Hescox illustrated cover for M.A.R. Barker’s 1985 novel Flamesong, features, aside from the curious green Ssú, a nice depiction of an ancient tube car.
You know how some folks really like a certain alien race or monster from Tékumel, like the Shén or Pé Choi; I have to admit  that I am absolutely crazy about the Ssú and I have some plans for them in Humanspace that go beyond being just some lasgun wielding interplanetary primitives pushed around by the armies of the Veritable Autocrator.
But what's up with the green Ssú ? According to an old Blue Room comment by Professor Barker:

It is indeed reported by explorers of the southwestern seas beyond Livyánu that there are enclaves of greenish-grey and reddish-brown Ssú there. The same is said to be true of islands in the seas to the east of the farthest coasts of Salarvyyá (territory occupied by the jet-black humans called the Nom). These different kinds of Ssú are just as hostile and just as tough as the grey Ssú of Ssúyal. There were obviously various "races" of Ssú in ancient times, just as there are of us Terrans. The biggest and toughest are the Black Ssú, who dwell on an island off the western coast of the Tane region far beyond the Plain of Towers.

Print Friendly
Posted by The Drune at 9:47 AM