Living and Dying in Humanspace Part I 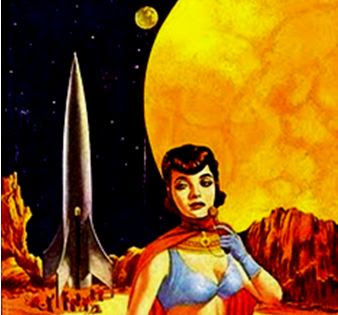 Nómek Kan slipped through the closing tubecar doors as the vehicle lurched into motion; the two veregyá, imperial secret police agents, were left behind in Dar Püz Station under the twin great white suns and the sprawling blue ixlélatl trees. They had pursued Kan from the Museum of Man down the narrow cobblestone streets of Old Urtek and across the rooftops of the Alien Quarter, racing with the black shadows of starships and system-ships ascending from the nearby starport.
Kan loosened his grip on the Z-ray pistol in the pocket of his overcoat and slid into a seat next to a void eyed ancient astronaut lost in some mystic trance. The spherical car was crowded to capacity with diverse denizens of Sirius 7 and Humanspace travelers – spacers on shore leave, gray proles commuting to and from the factories, shipyards and power plants that ringed the space port, a many legged cluster of bone white Pé Chói tourists, a party of hooded and robed Nininyal trade collectivists, a beautiful black tressed human woman, a Citizen, in a see through blue brassiere and blood red cloak…
The many complexities and variability of life in the Humanspace or Third Terran Empire in the 621st century AD defy summation; however a number of generalities may be drawn and a fundamental understanding of key socio-political structures and institutions may assist the reader in imagining the milieu.
At this time in history, the vast Humanspace Empire consisted of over 700 populated systems, bounded by a zone of Beyonder worlds and the great Shén Star Empire in the direction of the Galactic Core and by the Rimward Beyond and Hokun space, in the vicinity of Canopus, toward the rim of the galaxy. Spinward of Terra are the Neutral Zone, Regulus and Algenubi, homes of the ancient enemies of man and the Pé Chói before, the Vleshgá and Hlutrgú. Trailing of Terra is a great expanse of Humanspace colony worlds extending past Mirach to the Outker Beyond and the regions of far Deneb.
Interstellar travel is made possible by the use of starships equipped with the NAFAL (Nearly as Fast as Light) Three-Light Drive and Interfogulator inter-planar drive. For millennia, the speed of communication in Humanspace was limited to the speed of light and travel was limited to 99% of light speed. As a result of the dilation of time, star travelers would age only several years while decades or even centuries passed on the worlds of their origin and destination. The inventions of the ansible, or inter-dimensional radio, in the 495th century and the inter-planar star-drive in the 530th century, freed travel, trade, and communication from the limitations of light speed.
Few denizens of the Empire; however, have journeyed beyond their native worlds. In fact, it is estimated that less than one sixth of the population of Humanspace are considered Citizens. Citizenship is not a birthright but a privilege that may be won through military service or success in the gladiatorial arenas, granted by the Lords of Humanspace, or purchased outright. At the base of Imperial society are slaves and Proles, non-citizens that perform the great array of menial and unpleasant labor required by the Super-Scientific society. Although robots and androids are utilized for many such tasks, it has been found that the use of enslaved or Prole labor is more economical in many situations.
Throughout Humanspace, Prole life is organized to promote maximum productive efficiency. Proles march in step with each other, wear nearly identical jump-suits color coded to their mode of production or technical designation, and live in immense public housing complexes.
Citizens have numerous advantages over slaves and Proles in Humanspace; their basic rights are, at least nominally, protected under the Compact and they are generally allowed to move freely about the various planets and across space. Citizens may legally purchase and possess weapons and vehicles (including space ships), own slaves, employ labor and earn profits from their business ventures.
A shadowy class exists between Prole and Citizen; criminals, smugglers, black marketers, adventurers and scoundrels that pose as Citizens, and individuals, often with the assistance of a Citizen-patron, that are working toward Citizenship.
Next: Part II :The Government and Militaries of Humanspace
The government of Humanspace may best be described as a vast bureaucracy operating under the council of Narenyel (hereditary Lords or Archons ) from the 16 great Ketyel, or Noble Houses, the many lesser Houses, and ultimately the Galactic Emperor. Each planetary system is independently governed, usually by a Lord or planetary governor, and a great council of Lords (held at different locales from time to time) meets as needs demand...
Print Friendly
Posted by The Drune at 10:18 AM