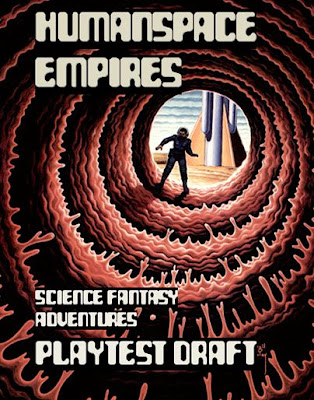 Download
Humanspace Empires Playtest Draft
I have edited the download link above to access the Revised Draft Rules.
Errata for the original draft may also be downloaded.

The draft playtest rules for Humanspace Empires, science fantasy adventures in the star-faring ancient past of Professor M.A.R. Barker's Tékumel, are linked above as a free pdf download.
These rules include character generation, PSY and Super-Scientific powers, and sufficient combat and adventuring rules to get a party through a space dungeon. The system is essentially an iteration of my Synthetic 75 Science Fantasy Retro Roleplaying concept, a mash up of (what I consider) the best from the hottest RPGs of 1975, Dungeons & Dragons and Prof. M.A.R. Barker's Tekumel: Empire of the Petal Throne.
Rules for robot and android characters have not been included in this draft.  I'm still not quite sure how to implement this class but I will post rules for the class on this blog or in a revised version of the playtest draft in the near future. Also, rules for starships, starship combat, wilderness or planetary adventures, and additional setting material will be gradually posted here and included in future publications.
I still envision the complete game pretty much as described in this post. The draft playtest rules will be expanded with additional material and will constitute Book 1: Science Fantasy Adventures. Book 2: Space Monsters will include a selection of inimical alien fiends, bug-eyed monsters, inter-dimensional horrors, and other terrible creatures and a system for randomly generating new space monsters.  Until this book is completed playtesters may use the Saturday Night Specials, create their own original space monsters, or modify creatures from Labyrinth Lord or broadly compatible games to serve as foes for the players. Book 3: Campaigns in Space and on Alien Planets will include starships and system ships, spaceship combat, vehicles, more detailed rules for planetary adventuring, encounter tables, and substantial setting material that will detail the worlds and star-faring civilizations of the 621st century AD.
Editing of the playtest draft was pretty minimal as the booklet was sort of rushed into production, hopefully to allow for some playtesting at an rpg con in the near future. Please let me know if you spot any problems or issues (I know of a few already) and I'd really like to hear any playtest reports.
I'm hoping that these rules will stir up some more interest in this project and enable a greater exchange of ideas on generalities and specifics as work continues on the game. I would also appreciate any contributions of rules, setting material, original art depicting the various species of Tekumel as they appear in the 621st century AD. As this is a free fan publication, no moneys will be involved, but you will certainly gain my gratitude and credit in the published work.
So please download, read, play, enjoy, and let me know what you think. Stay tuned to IX for more of Humanspace in the coming days...
Print Friendly
Posted by The Drune at 8:28 AM