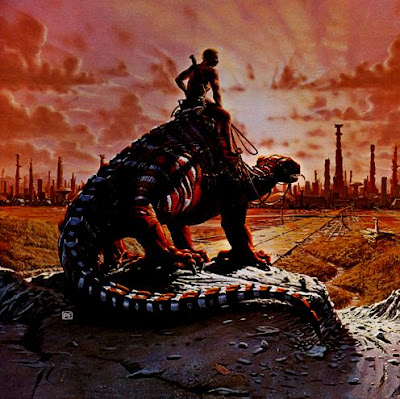 Red and troubled, the Martian landscape, its deserts, craters and ancient cities, filled the starship’s view screen. Aboard was Tlixlála Túrjan, daughter of sub-Nar Thulzá Túrjan, Warlord of Jakár. The transport glided on the thin atmosphere, bound for her ancestral home.

A blinding flash, the golden ship was ripped apart by the diambrite charge that had been secreted in its engine room. The burning tail section spiraled and splintered on the rocky desert floor as the sun sank behind the mountains and a dismal indigo twilight fell beneath the two moons. Tlixlála Túrjan emerged alone from the wreckage engulfed within the black globe of a Nega-Sphere. Her hand fell to her swollen abdomen and she prayed that her eggs were intact.

A squadron of heavily armed Shén clones mounted on Gakúz, great striped Martian lizards, appeared amidst the smoke and debris. One of the tall black scaled warriors leapt to the ground directly in front of the Martian woman. He lashed his tail and pounded his chest with a heavy fist.

“Mistress, we have come to take you home.”

As Terra is a glittering jewel amongst the many worlds of Humanspace, Mars is a burned out ember. Millennia past, during the dynasties of the Clonemasters, Mars rivaled Earth in wealth and power and stood as the stronghold of Ket Túrjan, greatest of the Gene Shaper houses. Nowhere in known space were the mad biological experimentations of the era as prevalent as on Mars. Even now, many bizarre and mutated creatures, products of the Martian gene vats, roam the desert sands of the red planet. It is also believed that the Nlyss and the genetically engineered Imperial Sultyat Clone Legions may trace their origins to Mars.
The long decline of the red planet began with the fall of the Second Empire. Although the noble house of Túrjan was spared dissolution, the fate of many Shaper houses, their power was forever broken. Ket Túrjan became a house divided. It split into warring factions and its members established themselves as feuding warlords of crumbling super-scientific city states.
Once a verdant paradise, the first world remade by earthmen, Mars was reclaimed by desert as the great subterranean terraforming machinery went unmaintained. The air grew thin and tainted, the nights colder, the days hot and dusty and most Martians with the means to do so abandoned the planet.
Some wonder how the magnificent Humanspace Empire tolerates this failed world that sparkles red in the night skies of its capital. Perhaps, the Lords of Humanspace fear the rise of a unified Shaper house and see the chaos of Mars as an answer to this dilemma or one might consider the many death arena games so popular on Mars and throughout the Empire. The strife and wars of Mars may be great entertainment.
In recent centuries, the elites of Mars have become obsessed with the alien Shén and the ancient gene vats have been used to breed great numbers of cloned Shén warriors. Many serve in the armies of the various warlords and many more have escaped into the desert zones. Members of the human nobility have adopted aspects of Shén culture, some have even transformed themselves into Shén and all fashionable wealthy Martian ladies are mutated egg layers.

Image above is the Einstein Intersection copyright Peter Elson. More of Elson's work may be seen at his official site.

Print Friendly
Posted by The Drune at 9:23 PM