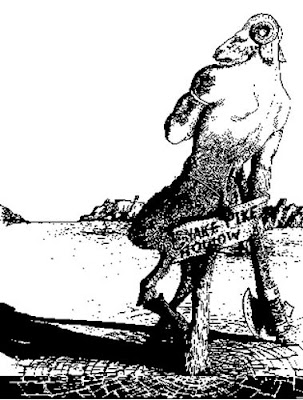 A recent post at Grognardia asked how various iconic D&D monsters have been re-imagined in readers' campaigns. The orc was presented as a case study. I found this interesting as I have never really liked orcs, particularly those of more porcine nature. Additionally, I have always avoided Tolkienesque tropes in my fantasy games, preferring more exotic and gritty swords and sorcery milieus.
At some point around 1979, after picking up a copy of 2nd edition Runequest, orcs were replaced with broos in most of the D&D campaigns that I ran. Below is a description of broos for use with Labyrinth Lord or compatible retro-clones. The following text is Open Game Content. The image above is copyright either Chaosium or Issaries and is probably in violation of the Glorantha fan publishing policy. It will be removed if requested.


Broos are bestial creatures with humanoid bodies and the heads of a variety of horned animals, most commonly goats, deer, or antelopes. They have reddish eyes and usually wear heavy leather armor boiled in the blood of their victims; however, a few in each group will wear scavenged piecemeal metal armor. They are typically armed with spears or clubs but may be found with various melee and ranged weapons. Their equipment is always filthy and poorly maintained. They may attack with their horns for 1d6 damage if unarmed.
Broos are monsters of primal chaos, exceedingly cruel and rapacious and known to worship gods of rape, murder, and disease. The population is 90% male; however they can father children on almost any animal or being including humans and hot elf chicks. A broo will have a randomly determined chaos feature (see below) on a roll of 1 on 1d6. All broos are immune to poison and disease and there is a 50% chance that each will carry a randomly determined disease.* A large group of broos will have an exceptionally strong leader with 8 hit points and a 50% chance of possessing a chaos feature. He also receives a +1 bonus to weapon damage rolls.
Many broos are feral, more primitive beasts that have developed in isolated subterranean or wilderness locations; however, a large minority are tribal and somewhat more sophisticated. A broo tribal chief will be a powerful 4 HD monster with a weapon damage bonus of +2. There is a 60% chance that any tribal group consisting of 20 or more broos will have a shaman with the abilities of a 3rd level cleric. It is believed that, in a vile wasteland somewhere in the world, there is a great broo king, a demi-god with the head of a unicorn.

Optional Rule: Females baring broo spawn will either need to find some means of aborting the fetus, or face a difficult month-long pregnancy. At the end of the month, the victim will have to go through a bloody, agonizing labor that will deal 4d6 damage unless they make a saving throw against death, damage halved on success. School Master
* In lieu of disease, the very cool Dungeon Funk table from Gorgonmilk could be consulted.


While on the Gorgonmilk tip, I prepared the following partial table of random chaos features adapted from the Runequest SRD. Anyone like to suggest additional nasty broo-tations?
Chaotic Features (1d20)

01 Blessed by Chaos:Roll twice on this table.

03 Cyclops: The creature only has a single eye. It suffers a –2 penalty to attack rolls.

04 Copper skin: The creature is completely covered by a thick skin of copper giving it a -3 AC Modifier.

05 Cloud of biting flies: A swarm of bloated biting flies surrounds the creature. All opponents within 5 feet suffer a -2 attack penalty.

06 Corrosive blood: Anyone within 5 feet of the creature takes 1d4 damage from splashing acidic blood if it is wounded.

07 Exploding death: When killed the creature explodes doing 2d6 damage to all in 1d4 x 10 foot radius, save vs. breath attacks for half damage.

08 Diseased: Any creature making physical contact with a Broo must make a saving roll or contact a wasting disease (-1 to Con per day until death or magically healed). Akrasia

10 Tentacles. 1d4 long, slimy, squid-like tentacles sprout randomly from their body. The creature may make a single additional attack for each tentacle. If the successful, the tentacle does 1d4 damage and the target is entangled in its grasp. If the character is not freed, the character will take 2d4 damage each turn thereafter. Optional Rule: There is also a 25% that a tentacle is actually an mutated, prehensile phallus. A female character who is ensnared has a 40% chance of being impregnated rather than taking additional damage, then released. The broo will no longer attack an impregnated female. Male characters are similarly violated for role-playing purposes (the broo is not particular), but only take the 2d4 damage. School Master

11 Spell reflection: The creature reflects first-level spells back at the caster. ckutalik

13 Over-powering stench. All in 5' space around the creature must save vs. breath weapons or be nauseated for 1d4 rounds (-2 to attack).ckutalik

14 Anti-Magic Field: The broo generates a field of reality warping chaos that cancels out all magical energy. Spells and magical items within a 1d4 x 10 foot radius of the creature will not function until it is slain. School Master


19 Golden viscera: The creature has a randomly determined internal organ made of solid gold and worth 1d4 x 50gp.

20 Bejeweled: The creature has 1d3 random gems embedded in random parts of its body. Female broos with this feature are always vajazzled.
Print Friendly
Posted by The Drune at 6:54 PM