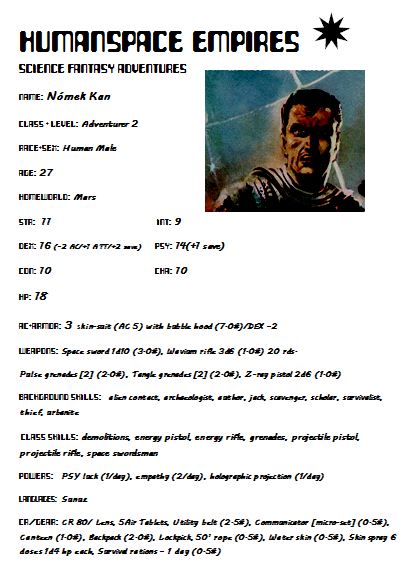 AFAIK, ckutalik de los Hill Cantons will be hosting a Humanspace Empires playtest Skype game on March 18.
See here and here.
I plan on joining the party and I've created a character: Nómek Kan, a human Martian 2nd level Adventurer. Kan is something of a Space Age da Vinci; xeno-archaeologist, expert in interstellar antiquities, troubleshooter, treasure hunter, scoundrel, author and thief.
I noticed a few gaffs in the most recent Humanspace Empires playtest draft that will need repair, some of the prices for super-scientific bombs and grenades are omitted and the weights and prices for some gear may need adjustment (e.g. the weight of a backpack will be reduced from 5 pounds to 2 pounds). I noticed that weight of gear and encumbrance might cause problems for character's with average or lower strength. I actually like the way this works out, it seems realistic and makes outfitting the character a bit more interesting and challenging.
I also noticed that characters in the playtest are given only CR 1000 to purchase equipment rather than 3d6 x CR 200 stated in the rules. CR 1000 doesn't go very far in Humanspace. I generated Kan's starting cash by the book and his equipment cost almost CR 2400. If the Referee has some reason to limit equipment to the bare minimum or can't be convinced to up the amount, I'll need to return a lot of super-scientific jank at Galactic Outfitters...
If anyone has any questions or comments on character generation reply to this post or email me at thedrune at gmail dot com.
Print Friendly
Posted by The Drune at 9:29 PM