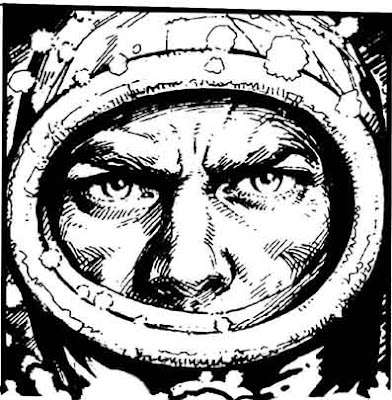 Il Male, l'autore di the ever weird and excellent blog, the Yaqqothl Grimoire, has created a new, shiny, ready-to-print and use Humanspace Empires Character Sheet!
Il Male's character sheet is much slicker than the generic and utilitarian five minute sheet that was included in the playtest draft and if you haven't seen it or followed any of the other inspired goings on at the Grimoire...check it out.
The art used on the sheet was taken from El Eternauta ("The Eternaut"), an Argentinian comic scripted by Héctor Germán Oesterheld and illustrated by Francisco Solano López that was published between 1957 and 1959 in the Hora Cero magazine.
I had never heard of this comic before but it seems pretty great,  Evidently, the story begins with a sudden deadly fluorescent snowfall killing nearly everyone in Buenos Aires. Juan Salvo and a few of his friends and family members survive because they were shut in playing truco. They cleverly craft a few hazard suits that allow them to roam about the post-apocalyptic world that's filled with the deadly snow, crazies, and the alien invaders that are responsible for the disaster.  Salvo is drafted into a resistance army fighting the invaders and eventually attempts escape with his wife and daughter using one of the alien spaceships.  The plan does not go well; however, Salvo accidentally activates a time travel device and he and his family members are separated, trapped in different dimensions of time. Salvo becomes El Eternauta, a voyager of eternity, searching for his family across the continuums.
I find this particularly interesting; the comic, or at least several of the sequels, evolved into a critique of reactionary, military governments and US imperialism. A quote by Oesterheld, a radical leftist, probably disappeared by the government of Argentina in 1976, may provide a clue to a hidden Marxist ideology at the core of a near universal trope of rpg gaming...the party (perhaps the word itself is telling?)...
Oesterheld wrote:

Now that I think about it, I believe that perhaps it is because of that lack of a central hero, that El Eternauta is one of my stories which brings me more pleasure to remember. The true hero of El Eternauta is a collective hero, a human group. And so it reflects, even if it wasn't my intention, my inner feelings: the only valid hero is the hero "in group", never the individual hero, the lone hero." 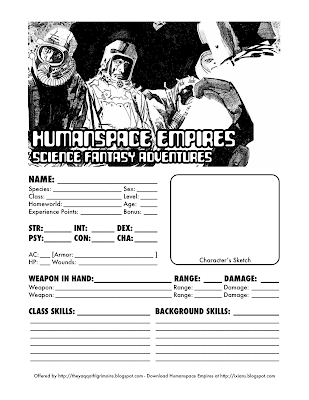 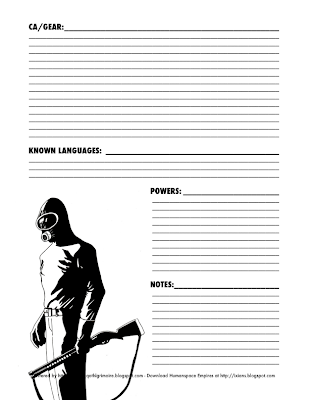 Print Friendly
Posted by The Drune at 9:36 PM