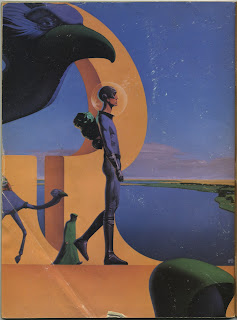 Posting has been somewhat sparse lately as I'm struggling to finish a dissertation scale report at work and I've been trying to put together some draft play-test rules for Humanspace Empires. I'm nearly finished writing the character generation, weapons, armor, and equipment rules. I need to tie up loose ends with these sections and write enough of the combat and adventuring rules to get a party through a space dungeon. I've added the Adventurer class, based on the optional Adventurer class for EPT that, I believe, was published in Dragon magazine. I'm struggling with how to handle robot and android characters and it seems that they may work best as yet another class; as such, the five character classes would be Adventurer, Android/Robot, Astronaut, Scientist, and Warrior.
I'm hoping to have the draft finished over the weekend and I will make it available for download as soon as possible. I've generated the first character: Zád Áxáqan, a young human astronaut from the desert planet Canopus 3. He grew up on a moisture farm in the highland wastes and managed to sign on as a crewman with a nefarious local space smuggler. He's an excellent starship pilot for his age and has natural, untrained PSY power.
Zád Áxáqan