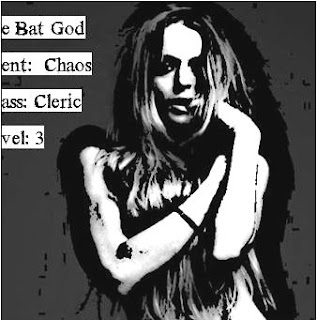 “I was born in Ys, in the Spiderwoods,” said Lohan, Priestess of Yezud the Bat-Headed One. “My father was a wood-cutter; my mother was taken as a sacrifice to the Carrion Crow in my sixth year. She was mutilated and chained to a stone a top of Mount Ged where the death birds picked her bones clean. Father sold me into the harem of Lord Varru at Citadel Sandustin. Varru was cruel but after he lost me in a game of skulls to High Priest Uvu of the Bat, I learned true deep suffering.”

“Such is the way of the gods and the fate of mortals,” said Khuvu.

“Fate? The concept of fate has the stink of law about it Lord Khuvu. Are you not aligned with Chaos?”

“Ha, Priestess, Chaos…yes…although some might say I am Evil or Chaotic and Evil or perhaps just one overly fond of change.  But about fate, I have read of a god of the peoples of the hill country in the west. He is a god of fate and they name him Ckutalik.

The people of that country have a curious ritual. They believe that Ckutalik is a just god, a judge; they formulate their desires, their plans, and their wishes and prepare arguments to sway the god to their favor. They hire scribes to write these petitions on scrolls of human skin and cast the scrolls into their hearth fires praying that the winds will carry their words to Ckutalik and that he will justly decide that their arguments are valid.

I suppose that they believe he reads their words and might strike dead a petitioner with a patently stupid argument, but ultimately it appears to be a system that rewards the clever liar. What is most amusing, and Chaotic, I contend, is that they believe that Ckutalik ultimately makes his decisions by throwing bones.”

Khuvu laid back, pipe in hand, drawing in the smoke of the red lotus.