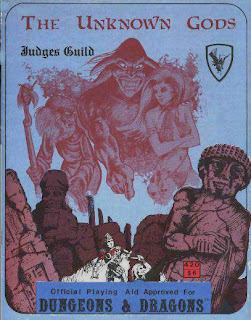 As previously noted the Petty Gods book is envisioned as a tribute to Judges Guild’s The Unknown Gods, published in 1980; written by Bob Bledsaw, Mark Holmer, Paul Jaquays, and Mike Petrowsky; and illustrated by Paul Jayquays and Sheryl England. The Unknown Gods was essentially an alternative to Supplement IV: Gods, Demi-Gods, & Heroes containing D &D stats, descriptions, and illustrations of 83 original fantasy gods including Margonne, the God of Evil Plans, Dorak, the God of Peace; Tika-Nahu, the God of Campfires; Suthak, the Goddess of Fertility; and Tar-Ark, God of Invisible [sic?].

Retrospective reviews of The Unknown Gods published online in recent years have been generally very positive; frequently the work is praised for its open ended, bare bones, or raw treatment of the subject matter. I suppose that this is the same quality that the Old School  finds most appealing about OD&D. The published work, certainly the color or background material, exists primarily to fire the imagination of the game players.

I probably purchased The Unknown Gods shortly after it was published in 1980. During this time I was primarily playing AD&D, Runequest, and Traveller. It was the fact that relatively few supplements of any kind were available for these latter games in 1980 that led me to purchase a number of JG books including Hellpits of Night Fang, City of Lei Tabor, Dra'k'ne Station, Ley Sector, and a few of the D&D aids such as Temple of Ra Accursed by Set, Tegel Manor, Book of Ruins, and Unknown Gods. I was, in 1980, 13 years old and as I recall the JG books were appealing due to their very low price points.

I must say, at this point, that I was not a fan of the JG books. I have vague memories from 30 years of opening a package full of JG books and over the following days becoming increasingly disappointed in the quality of the material. I'm sure that I never used more than a few of these books in play. Further, I found the books generally uninspiring.

I also began to DM more frequently than I played around this time. Although I preferred running RQ in a Glorantha that only slightly resembles what Glorantha has become, our core group usually wanted to play either AD&D or Traveller. Unfortunately I lost, long ago, all of the maps and notes of my original fantasy setting. I remember that the map was very similar to the RQ map of Dragon Pass, that Dhallak m’Thorsz Carn ruled Ardonirane from the Castle of Lead, and that across the orc infested Red Plains stood the port city of Anchorite. This world was a place of thieves, blood, sand, ancient evil, lost dungeons beneath the temples of half forgotten gods; very much a Swords and Sorcery milieu.

The gods were not terribly important in this campaign, except as the patrons of enemy cults such as the Black Seers; few players ran clerics. Unlike my friend who had served as DM throughout our first year or so of gaming, I chose to use no gods from real world mythology with only a few exceptions; the most powerful of the Neutral Wizards was Math and Set was the God of Ultimate Evil. I, having read a bit of Howard, Moorcock, Lovecraft et al, found great inspiration in certain parts of Supplement IV.  Tsathoggus, Hanuman the Accursed, the Blood Stained God, Yezud the Spider God, and Moorcock’s gods of the beasts and elementals existed in my campaign. None of the Unknown Gods; however, seeped into this world's myth and that book gathered dust on a shelf like some forgotten ancient codex.

Clearly, my first fantasy campaign was highly derivative, one part Pavis, one part Sanctuary, a dash of Hyboria and name drops from Metagaming's Death Test. Perhaps The Unknown Gods was too raw or original for my aesthetic sensibilities at age 13. Looking through it now after all these years I find myself still somewhat disappointed in the book.  I guess it's just not my thing.

Actually, only after writing Tau, the Guardian of Tombs and Cemeteries, for Petty Gods did I crack open my copy of The Unknown Gods. Contained within was Mondorent, Goddess of Tombs… 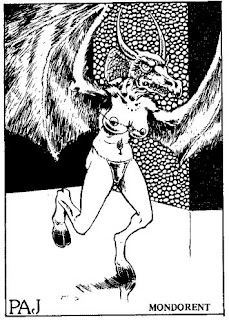 Mondorent appears as a woman with a Dragon's head, Elephant's ears, Bat wings, and Cloven hooves. She can shoot a 5D10 Fireball out of her mouth 4 times daily. Her large ears allow only a 5% chance of the goddess being surprised, since they allow her to hear even the slightest noise. She can even hear a Silence spell. Her main weapon is her hooves, with which she can lash out for 1 - 10 points of damage each. Mondorent will only be found underground.  Any form of light will cause her to leave.

I can dig Mondorent.  She has a demonic Eldritch Wizardry vibe and it is actually very cool that she can hear a Silence spell…
Print Friendly
Posted by The Drune at 8:47 PM