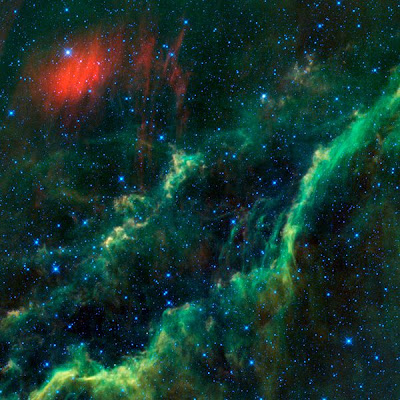 Although Empire of the Petal Throne, the original roleplaying game based on Tékumel, written by Professor M.A.R, Barker and published by TSR in 1975, included the premise that Tékumel had been a colony world terraformed and resettled by explorers from Humanspace, very few additional details relevant to the spacefaring ancients were included. The Páchi Léi, the Pé Chói, and the Tinalíya were identified as ancient allies of man that came to Tékumel from the stars as traders and colonists. The Ahoggyá, the Hláka, and the Shén were also identified as interstellar races. Of course the ancient Ssú, “the most inimical of all intelligent nonhuman races” and their aquatic cousins the Hlüss or Hlyss, "the Spawn of the Old Ones" were stated to have been present on Tékumel in pre-human times and the stinking Shunned Ones were described as “a very ancient race…perhaps predating the Ssú.”

Journal articles and likely other early Tékumel documents contributed to the arcana of space age Tékumel. Professor Barker’s article “the Splendor of Shenyu,” first published in the Tékumel Journal No. 1, 1977 stated that the Shén worlds, including their capital T’kru, “lie around Antares.”

In Swords & Glory Vol. 1: Tékumel Source Book: The World of the Petal Throne, published by Gamescience in1983 the origin star systems of Tékumel’s various interstellar races were made explicit. The Pé Chói homeworld orbited Procyon (Alpha Canis Minoris), the stumpy Ahoggyá hailed from the Achernar (Alpha Eridani) system, the aerial Hláka originated near Ensis (Eta Orionis), the Pygmy Folk came from a world near Mirach (Beta Andromedae), the Páchi Léi from the Arcturus (Alpha Boötis) system, the Swamp Folk from Unukulhai (Alpha Serpentis), the Tinalíya from Algol (Beta Persei), and the Urunen from Betelgeuse (Alpha Orionis). These races and the reptilian Shén of Antares (Alpha Scorpii) were considered allies of man. Man’s alien enemies were also identified, including the vicious amphibian Hlutrgú of Algenubi (Epsilon Leonis), the Shunned Ones from Regulus (Alpha Leonis), the aquatic Nyaggá from Alhena (Gamma Geminorum), the crystalloid Hokun from Markeb (Kappa Velorum), and the inter-planar shapeshifting Mihálli from Dorsum (Theta Capricorni). 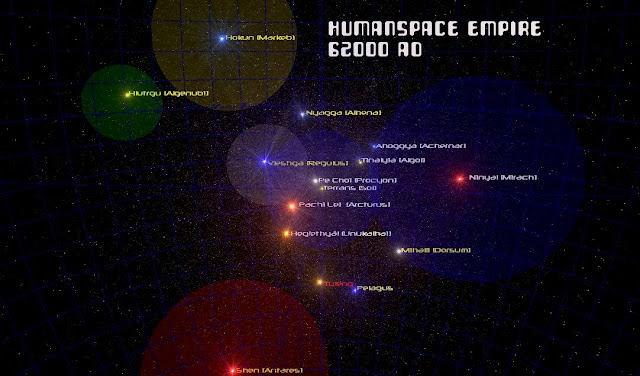 The locations of the home systems of most of these races and the Sol system are shown on the map of Humanspace circa 62000 A.D. Click the image for a much larger version of the file. Also shown are the stars Tuléng and Pelagus, Tuléng is the Tsolyáni name for Tékumel’s sun, the star Sinestra (Nu Opiuchi). Pelagus (Sigma Sagittarii) was, according to Professor Barker’s article the Pé Chói, inhabited by a race so dangerous and inimical that no species could approach them with impunity and the the Pé Chói were “instrumental in keeping human ships away from Pelagus.” It has been speculated that Pelagus might be the home system of the Silver Suits.

The map is centered on Sol and it is oriented with the direction of the galactic core toward the bottom and the galactic rim opposite. Antares, the most distant star shown, is located about 600 light-years coreward of Sol. Betelgeuse, home system of the Urunen, located about 640 light-years rimward of Sol is not shown; nor is Ensis, home of the Hláka, located about 900 light-years rimward of Sol. In 62000 AD these races were, perhaps, not yet contacted or known only to deep space explorers. Considering the locations of the named stars, the entirety of known space during the period of the colonization of Tékumel was included in a sphere with a diameter of about 1500 light-years located almost entirely in the Orion Spur.

The shading represents much generalized spheres of influence for the various cultures; humanity and its alien allies excepting the Shén, being included together in Humanspace. Interestingly, a Neutral Zone between Humanspace and the worlds of the Shunned Ones, the Vleshga, is indicated.

The map is generally accurate based on current astronomical data; however for purposes of this project, bearing in mind its pulp sci-fi sensibilities, I’m not terribly concerned about the ramifications of real science on the setting. It has been discussed on certain Tékumel message boards that many of the home systems of the various nonhuman races are unlikely to have life supporting planets of any kind due to their age, size, or other stellar characteristics. It has been suggested that the named stars are like sign posts, very bright marker stars located near the actual home systems. No matter how unlikely it may be, I prefer believing that the Shén homeworld, T’kru, bakes under the red supergiant Antares.

AFAIK, the locations of the homeworlds of Tékumel’s ancient star faring civilizations have never before been mapped as such. I find it very interesting how the worlds of Humanspace cluster together with various alien enemies at the periphery. I wonder if this was purely a fortuitous accident. The location of Tuléng and Tékumel also seems right, being located at the boundaries of Humanspace and the Great Shén Star Empire and in the neighborhood of some of the stranger alien stars.

The public domain image at top is of Menkhib and the California Nebula. These objects are about 1,800 light-years away from Sol, within the same spur of the Orion spiral arm of the Milky Way in which Sol is located.

The Map of Humanspace Circa 62000 AD is released into the public domain as an original image based on various Tékumel related documents. This work is unofficial and not approved for Tékumel.  Tékumel and its related products and materials are copyright © 1975 and 2010 by Prof. M.A.R. Barker. This work is not intended in any way to infringe upon that copyright or other intellectual property rights of Prof. M.A.R. Barker.
Print Friendly
Posted by The Drune at 7:08 PM